As a casino observer and watchdog, we at Slots Play Casinos have seen an almost meteoric rise on the use of bitcoin and other crypto-currencies in economic transactions and in casino gaming! 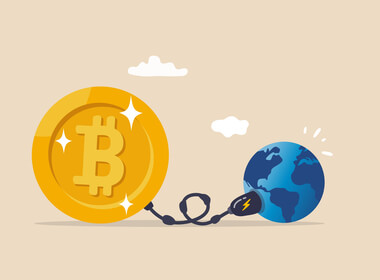 Bitcoin and other crypto-currencies came into the currency markets in 2009. People had spoken about some type of cryptocurrency for many years before that but no one had developed a way of creating such currencies and maintaining their value over time.

The invention of blockchain technology was the spark that lit the bitcoin fire and has driven the other cryptocurrencies since then.

It took quite a few years before some businesses were willing to accept bitcoin as payment for goods or services. Online casinos were very young and were developing in many directions at the same time so they were also a bit slow in accepting bitcoin.

Keep in mind that ewallets had also made their appearance and consumers and businesses alike were just getting their heads around the concept of an ewallet facilitating transactions. Most gamers, these days, don’t remember the early days of credit cards when recruiters went to university cafeterias and signed up everyone for a credit card.

Bitcoin is an Unprecedented Concept

An ewallet had some advantages that bitcoin didn’t have. For one, by the time there were several ewallets in the online transactions business, the whole concept of “e” had been established. People may not have understood how the internet and the digital world worked but they knew How to Use It!

In addition, every adult carried a wallet! So the idea of an ewallet was not all that difficult to understand. On the other hand, no one had ever heard of a crypto-currency and the very name made it sound sinister, secretive, and dangerous.

We understood banks, accounts, cash, money, and credit cards but not blockchain!

Finally, whereas government money is printed in a complex manner to make counterfeiting difficult to impossible, bitcoin was “mined” but it wasn’t mined in the way we were used to minerals being mined!  All in all, the entire idea of bitcoin as a recognized currency was bizarre at the very least.

So, let’s see if we can explain bitcoin in a manner that gamers can understand it so that they will feel comfortable using bitcoin at online casinos.

Why Does it Have That Scary Name?

A medium of exchange is the thing we use to buy and sell goods and services. It is important that until 2009 when bitcoin was introduced to the world, every medium of exchange in all of human history was a “thing” a physical entity. Bitcoins are digital! This was so hard to understand at the time that whoever coined the unfortunate name wanted to convey that this is a fake currency.

But bitcoin is not fake; it is different! A much better name would be “alternative currency”!

Why Was it Thought that an Alternative Currency was Needed?

First, there are many alternative currencies in the world. These are the “classic” government currencies, so, when someone wants to buy something in USD, he or she has to exchange their other currency for United States Dollars.

What is a Blockchain?

How Does Bitcoin Work at Online Casinos?

Banks are involved in direct transfers to casinos and through the credit cards and debit cards they issue. An ewallet acts as a bank of sorts as the gamer has money deposited in the ewallet and the wallet transfers it to the casino.

One of the reasons that gamers liked using an ewallet as their “bank” for the purposes of deposits and withdrawals to and from online casinos is that an ewallet offered a lot more privacy—which we can call anonymity—than a direct bank transfer or a credit card transaction.

Now, because of the extreme privacy of all of the information on the blockchain, many gamers—and casinos, as well—are seeing gaming in bitcoin to be even more private and anonymous than ewallets are.

Are There Any Drawbacks to Using Bitcoin for Online Casino Gaming?

There are indeed a few drawbacks:

Not every casino has yet chosen to add bitcoin to its list of banking options. This could cause gamers to choose NOT TO play at a given casino and they, therefore, could lose out on all of the good things that the casino offers from great games to excellent promotions.
Bitcoin and all other alternative currencies are very highly volatile. They are even more volatile than a high volatility slot!
This means that consumers have not yet stabilized an opinion about alternative currencies.  The upshot is that using bitcoin does entail accepting some extra risk as to the enduring value of the currency you have on deposit at a casino.

We see our role more as reporting on the phenomenon and letting gamers know which casinos accept bitcoin than recommending any single currency as the go to currency for online gaming.

Here is how to find out whether any of our recommended casinos offer gaming in bitcoin:

Enter Slots Play Casinos.
At the top of the landing page, go to the top and stand on “online casinos”.
The drop-down menu will have casino reviews. Go to the casino reviews and a long list of casinos will appear on the right. Move the cursor horizontally and then click on the casino you want to check for bitcoin availability.
We will use the first casino on the list, Ripper Casino. On the review page, under banking info, is deposit options. In that window, you will see the bitcoin symbol which tells you that Ripper Casino accepts bitcoin!
You can do the same for all of our reviewed and recommended casinos.

We emphasize online gaming since it is growing apace and has many advantages over land-based casino gaming which we also support.